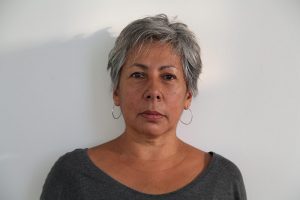 TORONTO (November 16, 2016) — The Gershon Iskowitz Foundation in partnership with the Art Gallery of Ontario (AGO) is pleased to announce that Rebecca Belmore is the recipient of the 2016 GERSHON ISKOWITZ PRIZE AT THE AGO. The award, which is presented annually to an artist who has made an outstanding contribution to the visual arts in Canada, includes a $50,000 cash prize and a solo exhibition at the AGO within two years.

Rebecca Belmore’s exhibition and performance history is extensive, both across Canada and internationally. As an indigenous artist, Belmore responds in a way that is very cognizant of where she is; as one juror remarked, her “practice remains a contestation”. She pushes conversations and questions institutions for all the right reasons. Highly respected as a performance artist, the initial seeds of her artistic inquiry appear as early as 1988 in Artifact #671B — in support of the Lubicon Cree against the Olympic Flame celebrations—and they continue to this day. Belmore’s work has huge scope and complexity, as seen in her installation of a massive blanket of beads for the Canadian Museum of Human Rights or the video installation The Blanket.

“Rebecca Belmore is one of Canada’s most important visual artists as her work crosses disciplines between film, installation and performance. As the thirtieth winner of the prize she joins a distinguished group of Canadian artists,” said Thomas Bjarnason, President of the Iskowitz Foundation. “Rebecca is renowned for a consistently provocative interrogation of the status of our indigenous peoples through work that tests the relationship of audience, artist and art.”

Solo exhibitions have included Kwe at the Justina M. Barnicke Gallery at the University of Toronto, Rising to the Occasion at the Vancouver Art Gallery, Fountain at the Canadian Pavilion of the 51st Venice Biennale, and The Named and the Unamed at the Art Gallery of Ontario. The scope of Belmore’s participation in group exhibitions indicates the depth and breadth of her practice, with in the coming year dOCUMENTA 14 in Athens and Kassel, Germany and LandMarks 2017 at various National Parks in Canada, Theatre of the Brave, A Symposium of Indigenous Performance Art at the IAIA Museum in Santa Fe; Oh, Canada at MASS MoCA, It is What It Is at the National Gallery of Canada, and the Sydney Biennial.

Rebecca Belmore’s work is in the collections of the National Gallery of Canada, the Art Gallery of Ontario, The Mendel Art Gallery, the Minneapolis Institute of Arts, Art Bank of Canada, the Hood Museum, Thunder Bay Art Gallery and private collections throughout Canada and the USA. Jurors for the 2016 prize included Barbara Fischer, Director of the University of Toronto Art Centre and curator; Peggy Gale, Foundation trustee and independent curator, writer and editor; Stephan Jost, Michael and Sonja Koerner Director and CEO of the Art Gallery of Ontario; and Reid Shier, Director/Curator of Vancouver’s Presentation House Gallery and the future Polygon Gallery.

“We’re proud to collaborate with the Gershon Iskowitz Foundation in presenting this prize to Rebecca Belmore,” said Stephan Jost, the AGO’s Michael and Sonja Koerner Director and CEO. “Her work is bold, intentional and has something very timely to say. We celebrate Rebecca’s contribution to Canadian art, and congratulate her for opening pathways for a new generation of artists.”

More details about Rebecca Belmore’s exhibition at the AGO in 2018 will be announced as they become available. Members of the jury encouraged consideration of expanding the medium, as Belmore does, and the exhibition itself beyond the institution.

ABOUT REBECCA BELMORE
Born in Upsala, Ontario in 1960, Belmore attended the Ontario College of Art and Design from 1984 to 1987 and was honoured by an Honorary Doctorate from OCAD in 2005. Belmore was awarded the Governor General’s Visual Arts Award in 2013 as well as the Lynch—Staunton Award in Media Arts in 2005 and the Hnatyshyn Foundation Visual Arts award in 2009. She currently resides in Montreal.

ABOUT THE GERSHON ISKOWITZ FOUNDATION
The Gershon Iskowitz Foundation is a private charitable foundation established in 1986 through the generosity of painter Gershon Iskowitz (1921 – 1988). Iskowitz recognized the importance of grants in the development of artists in Canada, in particular acknowledging that a grant from the Canada Council in 1967 gave him the freedom to create his distinctive style. Iskowitz’s works are in public and private collections across Canada and abroad. The Foundation’s principal activity is the designation of the Prize which is unique in that one can neither apply nor be nominated. A second distinct characteristic which many of the recipients have commented on is that the Prize is an excellent example of an artist supporting other artists. Iskowitz himself was actively involved in designating the Prize in its first years; after his death this responsibility passed to juries composed of trustees of the Foundation and invited artists and curators. The achievements of the first 20 years of the Foundation and the Prize are detailed in The Gershon Iskowitz Prize 1986 – 2006; the work of subsequent winners are included in the Foundation’s web site, www.iskowitzfoundation.ca

ABOUT THE GERSHON ISKOWITZ PRIZE AT THE AGO
At the 20-year mark of the Prize, the Foundation formed a collaborative partnership with the Art Gallery of Ontario to raise awareness of the importance of the Prize and through it the visual arts in Canada. The AGO is home to Iskowitz’s archives, which include early works on paper, sketchbooks and memorabilia, and it holds 29 paintings by Iskowitz spanning 1948 to 1987 in its collection. Beginning in 2006, the Prize has included a solo exhibition of the winner’s work at the Gallery. Among the 29 previous recipients of the Prize are Liz Magor, Betty Goodwin, General Idea, Stan Douglas, John Massey, Irene F. Whittome, Françoise Sullivan, Geoffrey Farmer, Brian Jungen, Michael Snow and Kim Adams.

ABOUT THE AGO
With a collection of more than 90,000 works of art, the Art Gallery of Ontario is among the most distinguished art museums in North America. From the vast body of Group of Seven and signature Canadian works to the African art gallery, from the cutting-edge contemporary art to Peter Paul Rubens’ masterpiece The Massacre of The Innocents, the AGO offers an incredible art experience with each visit. In 2002 Ken Thomson’s generous gift of 2,000 remarkable works of Canadian and European art inspired Transformation AGO, an innovative architectural expansion by world-renowned architect Frank Gehry that in 2008 resulted in one of the most critically acclaimed architectural achievements in North America. Highlights include Galleria Italia, a gleaming showcase of wood and glass running the length of an entire city block, and the often-photographed spiral staircase, beckoning visitors to explore. Visit ago.net to find out more.

The Art Gallery of Ontario is funded in part by the Ontario Ministry of Tourism, Culture and Sport. Additional operating support is received from the City of Toronto, the Canada Council for the Arts and generous contributions from AGO members, donors and private-sector partners.