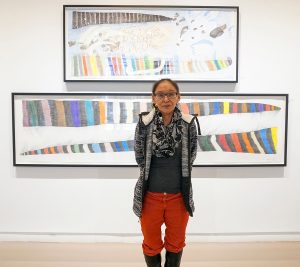 TORONTO (January 24, 2019)— The Gershon Iskowitz Foundation in partnership with the Art Gallery of Ontario (AGO) is pleased to announce that Shuvinai Ashoona is the recipient of the 2018 GERSHON ISKOWITZ PRIZE AT THE AGO. The award, which is presented annually to an artist who has made an outstanding contribution to the visual arts in Canada, includes a $50,000 cash prize and a solo exhibition at the AGO within two years.

Celebrated for her large-scale drawings, enigmatic subject matter, and collaborative work with contemporary artists, Shuvinai Ashoona is a third-generation Inuit artist living in Kinngait, Nunavut. The dramatic changes in the North—the shift from life on the land to settled communities and access to popular culture—are reflected in her art, which challenges stereotypical notions of Inuit art. Increasingly, her constantly evolving work is included in national and international biennales and exhibitions such as Oh, Canada: Contemporary Art from North America in 2013 at the Massachusetts Museum of Contemporary Art (MASS MoCA), and Unsettled Landscapes: SITElines: New Perspectives on Art of the Americas in 2014–15 at SITE Santa Fe.

Jurors for the 2018 Prize included Daina Augaitis, Chief Curator Emerita at the Vancouver Art Gallery and Independent Curator; artist and 2015 Iskowitz Prize winner Sandra Meigs; Robert Enright, Professor at the University of Guelph and Senior Contributing Editor to Border Crossings; and Stephan Jost, Michael and Sonja Koerner Director and CEO of the Art Gallery of Ontario.

Peggy Gale, President of the Iskowitz Foundation noted that “Shuvinai Ashoona has been creating remarkable, original images for many years and we are delighted to support her ongoing work at this time. It is a particular pleasure to look forward to her forthcoming exhibition, a special opportunity to experience this unique voice from Canada’s far North.”

Daina Augautis, a member of the jury summarized the importance of this award, “Following in the footsteps of a creative family, Shuvinai Ashoona has a singular vision that bridges the reality of everyday life in Nunavut with a remarkably bold and vivid imagination. In her fantastical drawings, colourful depictions of the present brim with hope and possibility”.

Shuvinai Ashoona was born in 1961 in Cape Dorset (now referred to by its original name, Kinngait). Her father, Kuiga Ashoona (1933–2014), a hunter and master carver who gained international recognition in his own lifetime, was a second-generation Inuit artist, the youngest son of the great first-generation Inuit artist Pitseolak Ashoona (c. 1904–1983). Cape Dorset had been settled only relatively recently by the time Shuvinai was ready for elementary school, and she was part of the first generation of children to attend school in the town as well as one of very few students her age in Cape Dorset who planned to attend high school in Iqaluit. The Ashoona clan, including Shuvinai and her daughter Mary, was unusual because they left Cape Dorset around 1979 and for almost a decade, lived independently in outpost camps at Luna Bay and Kangiqsujuaq, returning to Cape Dorset only for holidays or the arrival of the supply ship.

Shuvinai has been working daily at Kinngait Studios in Cape Dorset (formerly the West Baffin Eskimo Coop) for more than twenty-five years and is a major force in the development and success of the contemporary drawing practice now prevalent at the studio. She first began drawing in the early 1990s, when her younger sister encouraged her to go to the Kinngait studios. Ashoona first came to prominence in the late 1990s, when her work was included in the Cape Dorset Annual Print Collection of 1997. A few years later, alongside her grandmother, Pitseolak Ashoona and her aunt, Napachie Pootoogook, Shuvinai Ashoona’s drawings were included in Three Women, Three Generations at the McMichael Canadian Art Collection (1999).

Early exhibitions of Shuvinai’s work often brought her drawings together with those of her cousins Annie Pootoogook and Siassie Kenneally, for example at the Art Gallery of Alberta, Edmonton in 2006–07. In 2008 Shuvinai worked with Regina-based artist John Noestheden to create Earth and Sky, 2008, a gigantic banner that became part of a public art installation at the Basel Art Fair and was subsequently exhibited at the 18th Sydney Biennale in 2012 and at the National Gallery of Canada in 2013 in a major international exhibition, Sakahàn: International Indigenous Art. In 2009 the Justina M. Barnicke Gallery at the University of Toronto paired two contemporary Canadian women artists—Shuvinai Ashoona and Shary Boyle in a two-person show, Noise Ghost: Shuvinai Ashoona and Shary Boyle. In the online book published by the Art Canada Institute on Shuvinai Ashoona, curator and author Dr. Nancy Campbell defined this exhibition as “creating a new conversation, challenging old assumptions about Inuit art; for example, that it should be a singular production depicting animals, birds, or fish or figures of hunters and mothers”. Noise Ghost won the Ontario Association of Art Galleries Exhibition of the Year Award.

“The act of drawing becomes a state of existence through her hands”, as defined by Sandra Meigs, artist and jury member. “Shuvinai’s vividly coloured, large-scale drawings evoke a complex world of fantastical creatures, daily life in Nunavut, weird images from popular culture, and earthly ruptures in the North. She draws through her experience, her keen observation, and her imaginative humour”.

Details about Shuvinai Ashoona’s forthcoming exhibition at the AGO will be announced as they become available. Members of the jury suggested that consideration be given to announcing the awarding of the 2018 Prize to Shuvinai at Kinngait Studios in Cape Dorset.

The Gershon Iskowitz Foundation is a private charitable foundation established in 1986 through the generosity of painter Gershon Iskowitz (1921 – 1988). Iskowitz recognized the importance of grants in the development of artists in Canada, in particular acknowledging that a grant from the Canada Council in 1967 gave him the freedom to confirm his distinctive style. Iskowitz’s works are in public and private collections across Canada and abroad. The Foundation’s principal activity is the designation of the Prize which is unique in that one can neither apply nor be nominated. A second distinct characteristic which many of the recipients have commented on is that the Prize is an excellent example of an artist supporting other artists. Iskowitz himself was actively involved in designating the Prize in its first years; after his death this responsibility passed to juries composed of trustees of the Foundation and invited artists and curators. The achievements of the first 20 years of the Foundation and the Prize are detailed in the book The Gershon Iskowitz Prize 1986 – 2006; the work of subsequent winners is included in the Foundation’s web site, www.iskowitzfoundation.ca

At the 20-year mark of the Prize, the Foundation formed a collaborative partnership with the Art Gallery of Ontario to raise awareness of the importance of the Prize and through it the visual arts in Canada. The AGO is home to Iskowitz’s archives, which include early works on paper, sketchbooks and memorabilia, and it holds 29 paintings by Iskowitz spanning 1948 to 1987 in its permanent collection. Beginning in 2006, in addition to a significant financial award, the Prize has included a solo exhibition of the winner’s work at the Gallery. Among the 32 previous recipients of the Prize are Liz Magor, Betty Goodwin, General Idea, Stan Douglas, John Massey, Irene F. Whittome, Françoise Sullivan, Geoffrey Farmer, Brian Jungen, Michael Snow, Kim Adams, Sandra Meigs and Rebecca Belmore.

Located in Toronto, Canada’s largest city of 5.9 million, the Art Gallery of Ontario (AGO) is one of the largest art museums in North America. The AGO’s collection of close to 95,000 works ranges from cutting-edge contemporary art such as Untilled by Pierre Huyghe to European masterpieces such as Peter Paul Rubens’s The Massacre of The Innocents; from the vast collection by the Group of Seven to works by established and emerging Indigenous and Canadian artists; with a photography collection that tracks the impact of the medium with deep holdings of works by artists such as Garry Winogrand and Diane Arbus; and with focused collections in Gothic boxwood miniatures and Western and Central African art. Drawing on this collection—as well as collaborations with museums around the world—the AGO presents wide-ranging exhibitions and programs, taking special care to showcase diverse and underrepresented artists. A major expansion designed by Frank Gehry in 2008 with lead support from the family of Ken Thomson makes the AGO a highly-photographed architectural landmark. Visit ago.ca and follow @AGOToronto to learn more.

The Art Gallery of Ontario is funded in part by the Ontario Ministry of Tourism, Culture and Sport. Additional operating support is received from the City of Toronto, the Canada Council for the Arts and generous contributions from AGO members, donors and private-sector partners.