By IskowitzFebruary 24, 2020Uncategorized
No Comments 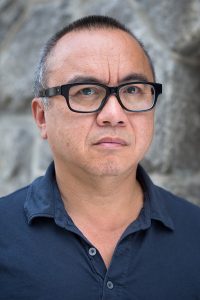 TORONTO (January 7, 2020 )—The Gershon Iskowitz Foundation in partnership with the Art Gallery of Ontario (AGO) is pleased to announce that Ken Lum is the recipient of the 2019 GERSHON ISKOWITZ PRIZE AT THE AGO. The award, which is presented annually to an artist who has made an outstanding contribution to the visual arts in Canada, includes a $50,000 cash prize and a solo exhibition at the AGO within two years.

Born in Vancouver, Ken Lum has an extensive exhibition and performance history, both across Canada and internationally. He is known worldwide for his conceptual and representational work across a number of media, including painting, sculpture and photography. His work ranges from conceptual in orientation to representational in character and is concerned with issues of identity in relation to language, portraiture and spatial politics.

A longtime professor, from 2000 to 2006 Lum was head of the graduate program in studio art at the University of British Columbia where he taught from 1990 to 2006. He holds an endowed professorship as the Marilyn Jordan Taylor Penn Presidential Professor at the University of Pennsylvania’s Stuart Weitzman School of Design in Philadelphia where he also serves as chair of the Department of Fine Arts. He was previously a professor at the l’École des beaux-arts in Paris, at Bard College in New York, and visiting professor at the Akademie der Bildenden Kunst, Munich, the California College of the Arts, San Francisco and the China Art Academy, Hangzhou. A founding editor and co-founder of Yishu Journal of Contemporary Chinese Art, Lum has published extensively, including an artist’s book project he co-conceived with philosopher Hubert Damisch. A book of his writings titled Everything is Relevant: Writings on Art and Life, 1991–2018 was recently published by Concordia University Press.

When notified that he was the unanimous choice of the jury for the 2019 Prize, Ken Lum commented: “the circumstances of Gershon Iskowitz’s life make him an exemplar of humaneness and global citizenry. I am honoured to be consider worthy of a prize began by and named after him.”

Since the mid-1990s, Lum has worked on numerous major permanent public art commissions including installations for the cities of Vienna, Zuoz (Switzerland),Rotterdam, St. Louis, Leiden, Utrecht, Toronto and Vancouver. Lum has also worked as part of several architectural/engineering projects in Vancouver, Edmonton, Philadelphia and Toronto.

He is on the board of advisors to the Toronto Biennial of Art, Socrates Sculpture Park (New York), Madison Square Public Art Consortium (New York), and Stenton House Museum and Gardens (Philadelphia).

Lum has won a Guggenheim Fellowship, a Pew Fellowship, a Hnatyshyn Foundation Visual Arts Awards, and a Surdna Foundation Award. He was awarded an Officer of the Order of Canada in 2017. He serves as Chief Curatorial Advisor to Monument Lab: a public art and history collective. Jurors for the 2019 Iskowitz Prize included Catherine Bedard, Curator and Deputy Director of the Canadian Cultural Centre, Paris; Naomi Potter, Director/Curator, Esker Foundation, Calgary; Geoffrey James, artist, winner of the 2002 Prize and trustee; and Stephan Jost, Michael and Sonja Koerner Director and CEO of the Art Gallery of Ontario, and trustee of the Gershon Iskowitz Foundation.

As Naomi Potter noted, Ken is a “ground-breaking, highly influential, and refreshingly thoughtful artist. Engaged in art making, writing, teaching, curation, and leadership, he continues to advocate for thoughtful negotiations of social and political conversations both inside and outside of the art world. His personal reflections on identity and belonging, social justice, and the value of pedagogy makes his outstanding contributions, regardless of medium, absolutely worthy of this prize.”

More details about Ken Lum’s exhibition at the AGO in 2021 will be announced as they become available.

The Gershon Iskowitz Foundation is a private charitable foundation established in 1986 through the generosity of painter Gershon Iskowitz (1921 – 1988). Iskowitz recognized the importance of grants in the development of artists in Canada, in particular acknowledging that a grant from the Canada Council in 1967 gave him the freedom to create his distinctive style. Iskowitz’s works are in public and private collections across Canada and abroad. The Foundation’s principal activity is the designation of the Prize which is unique in that one can neither apply nor be nominated. A second distinct characteristic which many of the recipients have commented on is that the Prize is an excellent example of an artist supporting other artists. Iskowitz himself was actively involved in designating the Prize in its first years; after his death this responsibility passed to juries composed of trustees of the Foundation and invited artists and curators. The achievements of the first 20 years of the Foundation and the Prize are detailed in The Gershon Iskowitz Prize 1986–2006; the work of subsequent winners are included in the Foundation’s web site, www.iskowitzfoundation.ca.

At the 20-year mark of the Prize, the Foundation formed a collaborative partnership with the Art Gallery of Ontario to raise awareness of the importance of the Prize and through it the visual arts in Canada.

The AGO is home to Iskowitz’s archives, which include early works on paper, sketchbooks and memorabilia, and it holds 29 paintings by Iskowitz spanning 1948 to 1987 in its collection. Beginning in 2006, in addition to a substantial financial award, the Prize has included a solo exhibition of the winner’s work at the Gallery. Among the 31 previous recipients of the Prize are Liz Magor, Betty Goodwin, General Idea, Stan Douglas, John Massey, Irene F. Whittome, Françoise Sullivan, Geoffrey Farmer, Brian Jungen, Michael Snow, Kim Adams and Rebecca Belmore.

Located in Toronto, Canada’s largest city of 5.9 million, the Art Gallery of Ontario (AGO) is one of the largest art museums in North America. The AGO Collection of close to 95,000 works ranges from cutting-edge contemporary art to significant works by Indigenous and Canadian artists and European masterpieces. The AGO presents wide-ranging exhibitions and programs, taking special care to showcase diverse and underrepresented artists. Its 585,000 square foot building was most recently expanded in 2008 by Frank Gehry, and attracts approximately one million visits per year. A new pricing model launched in May 2019 offers all visitors 25 and under free, unlimited admission; a $35 Annual Pass includes entry for an entire year. Visit AGO.ca to learn more.

The AGO is funded in part by the Ontario Ministry of Tourism, Culture and Sport. Additional operating support is received from the City of Toronto, the Canada Council for the Arts and generous contributions from AGO Members, donors and private-sector partners.