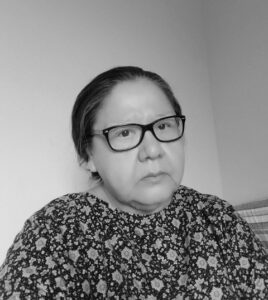 TORONTO (March 2022) — The Gershon Iskowitz Foundation in partnership with the Art Gallery of Ontario (AGO) is pleased to announce Faye HeavyShield as the recipient of the 2021 GERSHON ISKOWITZ PRIZE AT THE AGO. The award, which includes for the first time a $75,000 cash award, as well as a solo exhibition at the AGO, is presented annually to an artist who has made an outstanding contribution to the visual arts in Canada.

HeavyShield draws on her experiences of the traditional ways of life of her ancestors to create powerful installations and sculptures that incorporate concepts of family, home and a relationship to the land, in particular that of the Kanai (Blood) Nation in Southern Alberta where she grew up and where she still lives. Her practice, she has said, is a reflection of her environment and personal history, with the past, present and imaginary serving as her unique vocabulary. Minimalist in appearance, her artworks feature repeating forms and recurrent motifs, including spirals, circles, grids, and lines, which may evoke a sense of community, as seen, for example, in a recent exhibition at the Art Gallery of Alberta, and in the installation wave (2018), created for the Remai Modern, Saskatoon.

Natural materials and images of them as well as sound also appear frequently in her installations and sculptures, recalling the landscape to which she feels a strong connection. Beyond the significant impact of HeavyShield’s work over more than three decades, and the visual language she has developed, the members of the jury also cited her role as a mentor, and the strength she has shown within the Indigenous community.

Jurors this year included artist and 2017 Gershon Iskowitz Prize winner Valérie Blass; Catherine Crowston, Director of the Art Gallery of Alberta, Edmonton; Felicia Gay, MITAC Curator at MacKenzie Art Gallery in Regina, as well as trustees of the Foundation Gerald McMaster, who is an artist, curator and professor at OCAD University, and Stephan Jost, the Michael and Sonja Koerner Director and CEO of the Art Gallery of Ontario.

HeavyShield has exhibited in solo and group exhibitions nationally and internationally, including Nations in Urban Landscapes at the Contemporary Art Gallery in Vancouver; rock paper river at Gallery Connexion, Fredericton; Into the Garden of Angels at The Power Plant in Toronto; kuto’iis (blood) at the Southern Alberta Art Gallery; the 2005 Alberta Art Biennial; Hearts of our People: Native Women Artists, at the Minneapolis Institute of Art; and Clans, at the Southern Alberta Art Gallery. Institutions that house her work include the National Gallery of Canada; the McMichael Canadian Art Collection; the Alberta Foundation of Art; the Glenbow Museum; the Heard Museum; the Eiteljorg Museum of Native American Art and Western Art; the MacKenzie Art Gallery and the Kelowna Art Gallery. She is the recipient of an Eiteljorg Native American Contemporary Art Fellowship and received the Lieutenant Governor of Alberta Distinguished Artist Award in 2021.

More details about Faye HeavyShield’s exhibition at the AGO in 2023 will be announced as they become available.

The Gershon Iskowitz Foundation is a private charitable foundation established in 1986 through the generosity of painter Gershon Iskowitz (1921–1988). Iskowitz recognized the importance of grants in the development of artists in Canada, in particular acknowledging that a grant from the Canada Council in 1967 gave him the freedom to create his distinctive style. Iskowitz’s works are in public and private collections across Canada and abroad. The Foundation’s principal activity is the designation of the Prize which is unique in that one can neither apply nor be nominated. A second distinct characteristic which many of the recipients have commented on is that the Prize is an excellent example of an artist supporting other artists. Iskowitz himself was actively involved in designating the Prize in its first years; after his death this responsibility passed to juries composed of trustees of the Foundation and invited artists and curators. The achievements of the first 20 years of the Foundation and the Prize are detailed in The Gershon Iskowitz Prize 1986–2006; the work of subsequent winners is included on the Foundation’s web site, www.iskowitzfoundation.ca.

At the 20-year mark of the Prize, the Foundation formed a collaborative partnership with the Art Gallery of Ontario to raise awareness of the importance of the Prize and through it, the visual arts in Canada. The AGO is home to Iskowitz’s archives, which include early works on paper, sketchbooks and memorabilia, and it holds 29 paintings by Iskowitz spanning 1948 to 1987 in its collection. Beginning in 2006, in addition to a substantial financial award, the Prize has included a solo exhibition of the winner’s work at the Gallery. Among the 35 previous recipients of the Prize are Liz Magor, Betty Goodwin, General Idea, Stan Douglas, John Massey, Irene F. Whittome, Françoise Sullivan, Geoffrey Farmer, Brian Jungen, Michael Snow, Kim Adams, Rebecca Belmore and Ken Lum. The most recent exhibition of a prize winner at the AGO was of the work of 2019 recipient Shuvinai Ashoona, which has just closed.

Located in Toronto, the Art Gallery of Ontario is one of the largest art museums in North America, attracting approximately one million visitors annually. The AGO Collection of more than 120,000 works of art ranges from cutting-edge contemporary art to significant works by Indigenous and Canadian artists and European masterpieces. The AGO presents wideranging exhibitions and programs, including solo exhibitions and acquisitions by diverse and underrepresented artists from around the world. In 2019, the AGO launched a bold new initiative designed to make the museum even more welcoming and accessible with the introduction of free admission for anyone 25 years and under and a $35 annual pass. Visit AGO.ca to learn more.

The AGO is funded in part by the Ontario Ministry of Heritage, Sport, Tourism and Culture Industries. Additional operating support is received from the City of Toronto, the Canada Council for the Arts and generous contributions from AGO Members, donors and privatesector partners.